After the recent and successful acquisition of Facebook for the most popular front-end camera app Instagram known to iOS and Android, now comes Face.com. According to the reports, one of the most controversial rumors that have been lurking in the social networking world is now confirmed. Face.com was said to have been acquired for a price somewhere between $55USD and $60USD. The amount said was a combination of cold cash and Facebook’s stocks. It was never divulged by both parties on the real score of the deal but the only truth about this news is that the acquisition was official. It was even posted on Face.com’s blog site expressing their excitement and how happy are they with their recent success and exposure. 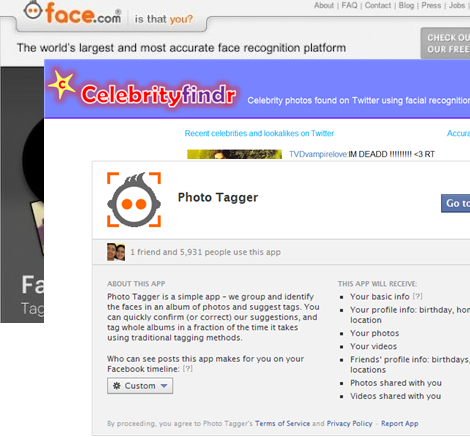 What is Face.com really and why did Facebook acquired their company? Face.com, according to their profile is a company which focuses on facial recognition technology. The company provides FREE facial recognition API for other developers interested creating an application with this feature. And two of the known successful applications were Phototagger (Facebook app) and the Celebrityfndr.  The Phototagger is a Facebook application that automatically tags your friends on each photo you upload. While Celebrityfindr is an online application or website that automatically finds all celebrities (even lookalikes) that have been uploaded via Twitter.

Whether you believe it or not and even I must admit that we have tons of photos uploaded in Facebook. Some of these tons of old photos and even new ones were left untagged especially those mobile photos we usually upload – unless we do it manually.  And without you realizing it there could be some of your photos or even photos of you taken by your friends posted on their walls and/or some other pictures lurking over Facebook that even you didn’t knew about it – talk about privacy. At least with these kind of initiatives and applications we’ll get notified that someone from your circle is posting your photos.

At the end of the day, if I am to analyze Facebook’s direction since the acquisition of Instagram, launching of Facebook Camera and now Face.com’s facial recognition app, it simply shows that Facebook is trying to focus on what’s trending now in the industry – mobile photo for mobile technology. We are all aware that smartphones and tablets whether it is Android, iOS, Kindle or anything alike, they are becoming more and more popular than PC and notebooks. And it seems that Mark Zuckerberg is trying to aim and focus on this direction. With Facebook Camera and Instagram, they can easily integrate these front-end applications with Face.com’s facial recognition API. Good job Mark!

Let us just see what happens next.

Previous Post Microsoft Unveils Surface Tablet – Will It Be the Next iPad Killer? [VIDEO]