Since the launching of Samsung Galaxy Note earlier this month, me and my “tech geek” friends were already talking about it and comparing its features with other Android smartphones and even with Apple iPhones.  Samsung Galaxy Note for us is really amazing and I even hear people calling it as “phablet” because not only of its size but also its features.  It’s like enjoying both the features and capabilities of a smartphone and a tablet – if in case you still don’t know Samsung have them both and they’re quite competitive in the market since it was launched.  So when I had the chance last night I went straight to this Samsung mobile shop at SM North Edsa – The Annex where I bought my Samsung Galaxy S II.  As expected, the shop is quite full of people looking and testing those mobile phones displayed and I had to wait for my turn so that I could hold and see for myself this amazing Samsung Galaxy Note.  And so, after a few minutes I got my chance and to be honest Samsung Galaxy Note is too light for its size and also a little bit thinner.  (Unfortunately, I ended up to the Samsung Galaxy Note which was not turned on because out of three units in that Samsung shop they only have one available unit which is setup for demo and sad to say there’s this little girl enjoying playing Plants versus Zombies on that unit and didn’t even care if the line behind her is already getting longer and longer waiting for their turn 🙁 ).  But I am planning to go back to that shop within this week to get some more pictures – better shots.

So how much is Samsung Galaxy Note in the Philippines? I personally asked the person in-charge of Samsung Galaxy Note on that shop and he told me that if you wanted to cash this smartphone out, it will cost you PhP 34,990.00 (cold cash) but if you want to use your credit card, there’s a promo with HSBC credit card where you can get this for a price of PhP 1,055.29 per month for 3 years or 36 months. 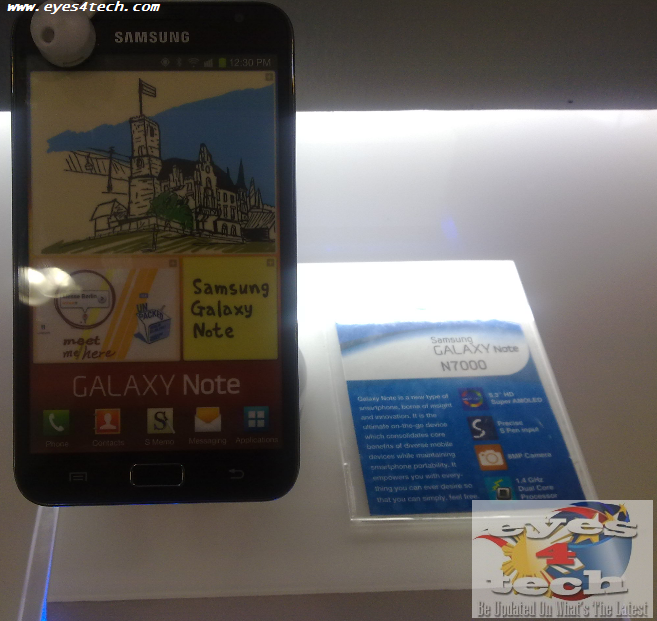 But to tell you the truth there are so many other Samsung retailers out there selling the same product with the same warranty at a lower cost. And here are some of the shops we found that sells cheap Samsung Galaxy Note.

[note]Prices may change specially with Christmas season coming in, it may go lower and depreciate. So if you’re willing to wait a little more then it’s entirely up to you.[/note]

Here’s a little treat for you, this is the official video launched by Samsung mobile showcasing their Samsung Galaxy Note.