Temple Run is an iOS game created and developed by a group called Imangi Studios recently announced on Twitter that they are (still) developing the said game for Android operating system based devices.  The game was first launched late last year for iOS device users (iPhone, iPad, and iPod Touch users) and soon after that release date needless to say it became viral.  I have seen so many iDevice users playing Temple Run and some of them admitted that they are now addicted to this game.  And because the game Temple Run became so popular on iOS devices, some Android users were asking if it is possible for some Android developers (if not the same creator of Temple Run) to develop the same game for Android devices.  This topic was actually discussed on Google Android Product Forum when someone asked if when can be the Temple Run available in the Android Market. And due to the massive demands, Imangi Studios have decided to bring this latest best and addictive game from iOS to Android. YEY! 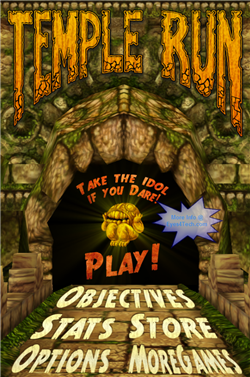 However, pinning down the exact date as to when this popular and addictive game Temple Run will be release still remains mysterious. Not even the Imangi Studios can confirm when will be the official date but they did promise that they will be posting it on their official Facebook group page and on possibly on Twitter. Rumors says that the game will be released this month (February) but Imangi denies it and said that there’s no truth about that false news spreading to all spectators.

One of the known popular game for iOS is Angry Birds and for years there are still people playing this game and it already expanded from iOS devices to Google Chrome Browser, Android Market and the most recent is Rovio decided to launch the same game on Facebook. And this is not also impossible for Temple Run, since they’re becoming so popular on iOS then they should be serious on converting this amazing and awesome game for Android – and they should do it fast while they’re hot!

I guess we have to wait for Imangi Studios final announcement as to when Temple Run will be available in the Android Market. If you still haven’t seen yet how the game looks like and how it is played then you can check out this video below from Imangi showing the highlights of the game.

Next Post Do you Want a Custom USB Flash Drive You Can Wear?