Snapp! by Sensewhere Ltd. created a social network indoor map app for Android and iOS devices alike is taking a new level of social networking. I have actually seen and tried a Facebook app similar to this one called Find Friends Nearby back in June. But this was immediately pulled out by Facebook after facing so many questions from the users and one of which is of course “privacy”. But some actually loved this kind of application on their smartphones and one of which is FourSquare where most poeple would check-in to tell the world where they are.  However, there are still many users who doesn’t like the idea of telling the world or even their friends where they are or who are with them – it’s all a matter of privacy. But there’s no harm in trying this new Snapp! social network indoor map app for Android and iOS. I will give it a shot and see what difference can it really make. 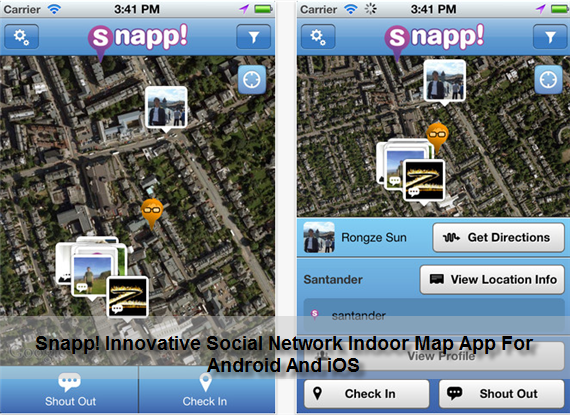 Snapp! app for Android and iOS alike is a new level of social networking that lets you keep in touch with your close friends, relatives and even with your friends from your Facebook list, Twitter, FourSquare, and even Friendswhere. The application itself can be configured to automatically check you in on places where you usually hang-out. You can also share messages, shout-outs and photos with your friends.

Snapp! indoor map app utilizes the power of combining the features and capabilities of WiFi signals and GPS to locate your whereabouts. The application also uses a dynamic and intelligent database algorithm to determine your exact spot within ten meters.

The indoor map app is powered by Micello Inc. maps – with 100 maps (so far…) you can check-in or locate a friend who’s inside a shopping mall, airports, travelling on a bus, hospitals and many more. However, as I’ve initially mentioned the indoor maps are not yet totally complete if we’re talking about indoor maps of almost all of the establishments around the globe. But the app being young already have so many potentials for bringing social networking into a new level.

Watch this promotional video from Snapp! showing how it works and how is this considered as the new level of social networking.

If you want to download this indoor map app for Android and/or iOS, you can click the links below and see it for yourself.