It’s finally out! you can now download Temple Run For Android now. Imangi Studios released Temple Run for Android and it is now available for you to download from Google Play – More information here

Finally! It was officially announced by Imangi Studios a few hours ago from their Temple Run official Facebook webpage that Temple Run for Android will be released on the 27th of March. So it will be like almost three weeks from now before we see Temple Run for Android being served in the Android Market. Temple Run is considered to be one of the most popular iOS game from Apple world which became one of the top grossing free app early this year and it’s quite true that this game is pretty addictive too. Imangi Studios decided to rewrite this addictive game to be compatible with Android platform after so many requests from other users who are using Android devices or for those end-users whom recently migrated away from Apple. And I am one of those guys who monitored this request since December of last year. 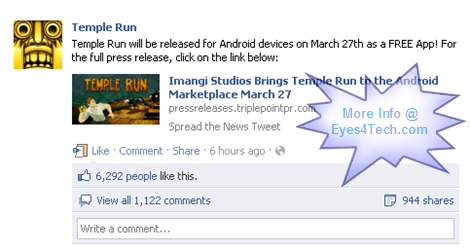 You can now test your reflexes and practice your speed in tapping and swiping on your capacitive touchscreen display as you run, jump, turn through the ancient temple walls and avoid from falling from sheer cliffs. The best of all, you can now enjoy this game whether you are into iOS or Android gadgets.  Before I forget, this is also a social game where you can boast and post your score on Facebook – “beat my score” as you may put it. 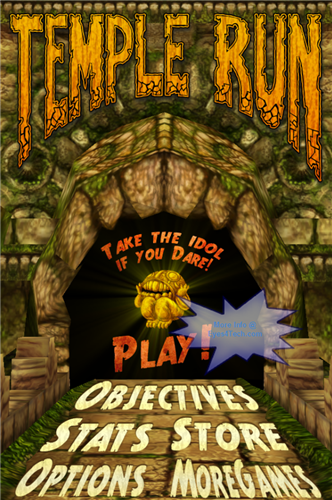 At least we’ve seen and heard it from Temple Run developers itself about the official release and all of the spectators won’t be misled anymore by all those people scattering rumors that this game is now out and ready for download.  If you go into the Android Market and search for Temple Run, you’d notice that there are so many apps already there relating to Temple Run just before the official release – I recommend you NOT to download this as this may cause harm into your device.  There are even Temple Run Cheat apps lurking within the market – these are not good.

I myself can’t wait until I see this Android game running on my Samsung Galaxy S II smartphone on the 27th of March. I will update you all once it’s ready for download from the Android Market and a review of the game on my device, perhaps.