Another budget-type smartphone from Samsung that will land first in Italy this March – meet Samsung Galaxy Pocket. This is yet another one of the newest Android smartphone in the growing family of Samsung Galaxy. And according to Samsung’s official report, after Samsung Galaxy pocket has been distributed over Italy they will start to roll-out and ship this device gradually in countries like Europe, Commonwealth of Independent States (CIS), Latin America, Asia (Southeast and Southwest), the Middle East, Africa and of course China. Prices have not been revealed yet but my hunch is it will be more close to how much is Samsung Galaxy Y being sold in your local market since they really don’t differ that much. 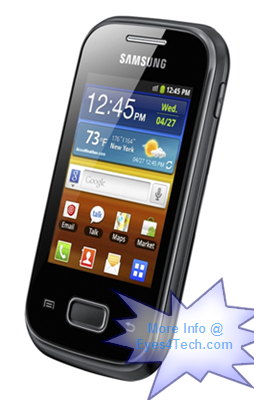 Let’s see what’s inside the hood of Samsung Galaxy Pocket by checking the features and specifications.  First, this Android smartphone dimension is 103.7mm x 57mm x 12mm and weighs 97g which seems to be a little smaller than Samsung Galaxy Y (Young).  It sports a 2.8 inches QVGA capacitive touchscreen display with a resolution of 240 x 320 TN LCD. Of course a Samsung Galaxy Pocket also includes a 2MP fixed focus camera at the rear part of the smartphone – pretty understandable camera specs for a budget smartphone.  This smartphone is powered by Android 2.3 Gingerbread under an 832MHz processor and has a 3GB user memory and can be extended with a microSD slot up to 32GB for storing your photos, videos and other stuffs. Bluetooth version 3.0 ready and uses USB 2.0 technology and Wi-Fi ready.  The network it supports are HSDPA 3.6UMTS 900/2100 and EDGE/GPRS 850/900/1800/1900. 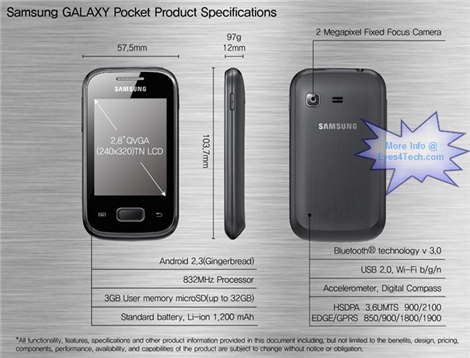 So what’s really new and promising about this Samsung Galaxy Pocket smartphone? First and foremost, it’s portable and small because of its dimensions and weight. But the real catch are the upgrades made by Samsung for this smartphone such as the TouchWiz which gives a more smoother and faster navigation of menus and widgets. They’ve also improved the speed for SMS or text messages input (hopefully we won’t see any delays anymore while typing). Well, another one is the aforementioned memory allocation for application that preps you for heavier Android applications. There’s also the built-in FM radio station just in case you get bored. 🙂 And faster web-browsing. I wouldn’t really boast about the built-in and added social applications like the Samsung’s ChatOn because I personally believe that people would still go for Facebook, Twitter and other popular and known social media websites and applications.

My guess is that before the mid of 2012, we’ll be seeing this smartphone here locally in the Philippines as well.