Samsung will be adding a new cheaper yet powerful Android smartphone to the Galaxy family called Samsung Galaxy S III mini.  After the recent release of Apple’s iPhone 5, their greatest rival in the mobile industry, Samsung, doesn’t seem to be threatened at all. But Samsung don’t want to be lax and lying down with their success right now with their Samsung Galaxy S III, Galaxy Note II, and with their other known smartphones. And if it is indeed true that they will be releasing another smartphone that will target price-conscious tech-consumers, then Samsung Galaxy S III mini will surely steal some buyers from their rivals – specially for those aiming to get the new iPhone 5 or Nokia Lumia 920. 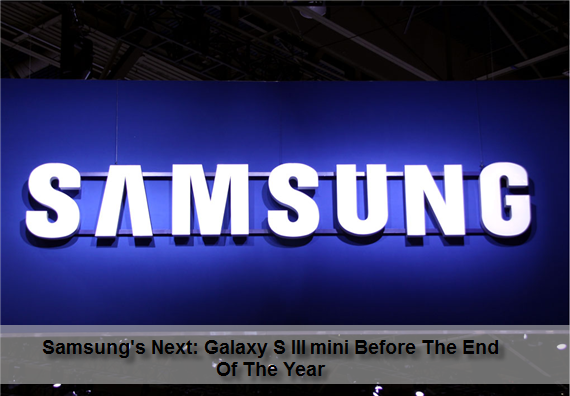 There’s nothing concrete yet as of the moment about the whole specifications and bundled applications that the new Galaxy S III mini. But so far, we believed that there’s truth into this leak. According to an email from Trip Chowdhry (Managing Director of Equity Research at Global Equities Research) shared from NASDAQ that the rumored Samsung Galaxy S III mini was accurate after talking to some Android developers.

“We spoke to 3 Android developers, and they think that the above rumor that Samsung is going to Launch Galaxy S3 mini is accurate” ~ Trip Chowdhry (Managing Director of Equity Research at Global Equities Research)

As of this moment, the only thing that we know about this upcoming Samsung Galaxy S III mini aside that it will be cheaper among the Galaxy family is that it will sport a 5MP camera and a 4-inch screen display. However, it will be expected that this will be using a much lower processor as compared with Galaxy S III.  We will soon see more of this if Samsung pursue on releasing a miniature smartphone of their Galaxy S III flagship handset.

If we talk about sales, probably yes or close to a definite “absolutely!”. That is because if you look closer on what Samsung has to offer to all the consumers, the company offers a wide range of devices – from Android to Windows Phone. But do you really think that they have really beaten Apple with this scheme or strategy? If you look at what Apple is offering to their loyal consumers – it is nothing only but one iPhone series. In sales, they only use one SKU or what we call stock-keeping unit which is a unique identifier for a unique product or item. This simply means that they only belong on the same line. So if you buy an older iPhone, let’s say iPhone 4 or iPhone 4S, they still belong to the same product line. Now, which do you think is the real most popular smartphone?

In line with that, once the official unveiling of Samsung Galaxy S III mini is announced then that will be the time where people are going to decide whether it is practical to buy one.