Acer Iconia Tab A700 which was introduced in the market last month was packed with a native Android 4.0 other known as Ice Cream Sandwich. And the expectation from most users is that the next update or upgrade from Ice Cream Sandwich (ICS) to Jelly Bean (JB) will happen sometime next year. But thanks to the effort of ACER, they have been able to push the new Android 4.1 update and the company started the roll-out just this Thursday, 27th of September. Although, as expected most users received the notification the next day. The Android 4.1 Jelly Bean update for ACER Iconia Tab A700 is a 332MB upgrade which can be downloaded through over-the-air(OTA). 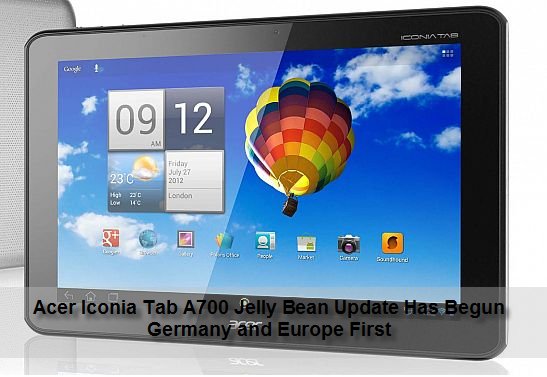 The first impression of most ACER Iconia Tab A700 when they first grabbed it wasn’t that pretty much impressive, as a matter of fact it was sluggish. But with the Project Butter Android 4.1 Jelly Bean update, it all went upside-down. Most early receivers of the Jelly Bean update were happy with the results after they have upgraded their devices. Some of the reported benefits after you upgrade your tab to Jelly Bean are (1) smoother user-interface; (2) faster Internet browsing; (3) longer life of battery – boost.

Why Should You Get a Python Certification Soon?

There are some things that you must remember when you upgrade your ACER Iconia Tab A700 to Jelly Bean and that is you should have a stable Internet connection and your battery is charged at least more than 50%. The reason for being cautious is that there were reports that interrupted upgrade bricked most early birds.  And you don’t want this to happen on your device.

Also, although the report says that the Jelly Bean upgrade is now available we still need to wait for the global push of this update globally. Usually a major update (even patches) will still depend on your region. The update still needs to be validated if it is indeed applicable based on your country. But keep on tuning and check if there’s already an update available for your device by checking your Software Update.

Next Post Samsung’s Next: Galaxy S III mini Before The End Of The Year