Early this month I posted an article where Apple seeded their iOS 5.0.1 Beta release which claims to fix the reported battery life problem/bug from all the new iPhone 4S users.  Actually, there are now two known big problems facing Apple engineers after the end-users bought their own iPhone 4S and the issues found were the (1) drastic drop of battery life and the other one is the (2) noise problem when doing voice calls.  The first issue spread like a wild fire and almost all the iPhone 4S users went straight to the official Apple discussion website to raise their complaints.  In fairness with Apple developers and engineers, they immediately tried to reach out these end users to help them fix the problem – hence, iOS 5.0.1 beta was released claiming to fix the battery life issue.  Unfortunately, it didn’t fix the issue and the problem still persist for most of the users while a little percentage says that it did fixed their problem with their iPhone 4S battery life.  Actually, most  of the iPhone users (either iPhone 4 or iPhone 4S) says that with iOS 5.0.1 release which they’ve downloaded over-the-air made their battery problem even worse – more worse than they had with iOS 5. 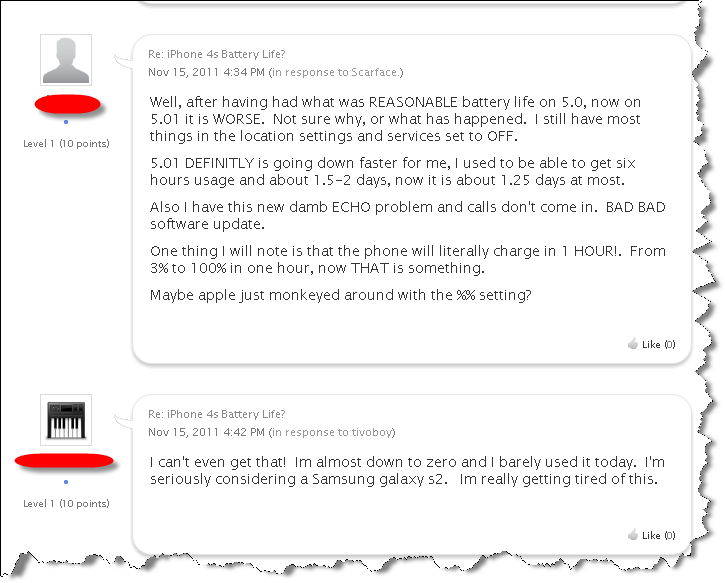 There are other users who has now become sarcastic about the issue while some are now considering to go away from iPhone 4S and go with Android smartphones like Samsung Galaxy S II.  I even became aware of some known iPhone 4S users who tried the two iOS 5.0.1 BETA versions and still encounters the same battery issue but this time it became worse than he had with his original iOS 5.

Some other iPhone 4 and iPhone 4S users tried to optimize their phones by turning off some of the features to give more life to their battery such as the following Wifi, Siri, iCloud, iMessages and FaceTime, cellular data, Bluetooth and Location Services.  But if you ask me, why would you get your own iPhone 4/4S if you can’t enjoy these features at all – makes sense right?  I mean, that’s the total package when an end-user buys the iPhone product and then it’s like there’s a hidden disclaimer that says “yes you can enjoy and use these features and apps but your battery will suffer severely“.

I do hope that Apple engineers would be able to come up with a concrete and permanent fix for the battery issue of iOS 5 for iPhone 4 and iPhone 4S as soon as possible or they’ll soon find out one day these Apple end-users will go-away from them and switch to Android smartphones.

I will provide you the latest updates if this has been permanently fixed.  But for now I leave you this question, will you still invest your budget just to get your own iPhone 4S?