Because of the need to protect sensitive electronic equipment, many people buy UPS devices, otherwise called an uninterruptible power supply. It is important to define what a UPS does for this discussion.

The purpose of a UPS is to maintain and extend the length of time when continuous power is supplied to the devices with which it is connected. It is something similar to a power surge bar with a battery compartment.

If the power fails, the battery fills in for a time continues to furnish the energy needed to power the unit until regular power returns or the battery’s charge is expired.

PCs are the primary devices a UPS is known to service in this fashion, but the concept is applied to many other types of sensors and especially heavy-duty devices that require continuous power.

The most common five types of units a UPS is used for are the following: 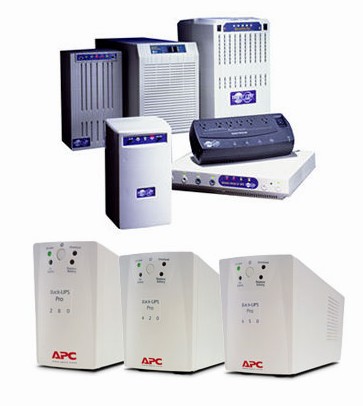 The concept of using UPS with the computer derives from the fact that sensitive data may be lost in the case of a power surge or outage. UPS units will continue to not only provide power to regulate it to ensure the continuity of the level of energy being applied to the PC remains constant. A UPS is also helpful to send “clean” power to the computer, thereby protecting it from possible damage from electrical currents and voltage that is “noisy” or filled with momentary feedback from other devices that may locally affect the power circuit.

The more recent digital and high-definition television units, including plasma and LCD flatscreen TVs, can be very sensitive to power spikes and changes in voltage. More and more consumers are using UPS units to regulate voltage and protect TVs from power fluctuations. They’re also used to prevent burnouts that may occur when there is a severe power sag or failure and the voltage drops – but UPS can preserve the power to your TV long enough for it to be turned off properly.

The prized fish you may ask to purchase a deluxe aquarium enclosure for may be at peril if the electrical pump that filters the water experiences a power failure. Fish tanks become very dirty or green within mere hours unless the water is changed, once the pump is disabled. Having the UPS battery-enabled unit prevents the aquarium pump from failing, which means you won’t have to clean out a funky-looking tank.

More devices than you may expect now come with battery backup. However, small batteries have a tendency to vary wildly in their projected life, frequently causing situations where the device has a dead battery in it during the real power crisis. Alarm clocks, smoke detectors, etc. may need additional help, so if you connect them to a UPS, they are insured to operate well in case an electrical problem occurs.

Most people who use cordless phones or other deluxe telephony units that require outlet power are in for a surprise in case of a power failure. Most of those devices are not backward compatible to allow the base function of answering and sending out calls to work unless regular power is coming to the device. The landline power system only sends enough power to be utilized by a simple corded phone. Having your complex phone device connected to UPS will permit you to have enough regular power coming to the phone to send and receive emergency messages.

Contributed by James who works at Borri penned this article. When he is at work, James helps maintain the UPS batteries that Borri sells.

Next Post Microsoft Hosting 101: Facts Every Webmaster Should Know