That’s right! March is the closest and our best bet that Imangi Studios will be launching Temple Run for Android, a popular game originally made for iOS devices. Temple Run made an official statement on their official Facebook fan page that the same game for Android won’t be released this February. The team had high hopes earlier of releasing the game for all Android users this month, unfortunately they failed. But there’s no one to blame for their efforts because they only wanted to ensure that everything is working perfectly and as expected from this soon to be released Android game. They also confirmed that they are now Beta testing a copy of Temple Run for Android – this only shows that the release will be available soon. 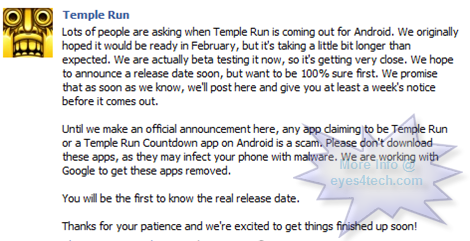 With this announcement straight from the developers of Temple Run, you should know by now that you need to refrain from seeking rumored leaks and information saying that they have the official release of this Android game. You might end up downloading an Android app that contains malicious codes and might steal information from your Android device. This feeling of excitement and enthusiasm is the main target of those hackers or developers with evil intentions. They create a clone application and publish it so that you can download and install it on your device. In the end, your Android devices will be compromised. So be cautious and responsible before you click on any links.  It will be better that you stay tune from Temple Run’s official report on Twitter and/or Facebook for the official release.