If you haven’t noticed it yet T-Mobile US is not included in the list of official mobile operators or carriers in Apple Store that offers the sixth generation and new smartphone flagship from Apple – the new iPhone 5.  Among the list of mobile carriers are AT&T, Sprint, and Verizon. Again, it’s another prestigious event from Apple that T-Mobile missed.  But it is never too late for T-Mobile US because reports says now that the aforementioned mobile carrier will soon be offering the nano SIM cards sometime in mid-October.  This is just perfect for the availability of the next batch of the unlocked iPhone 5 that will be coming in the US. 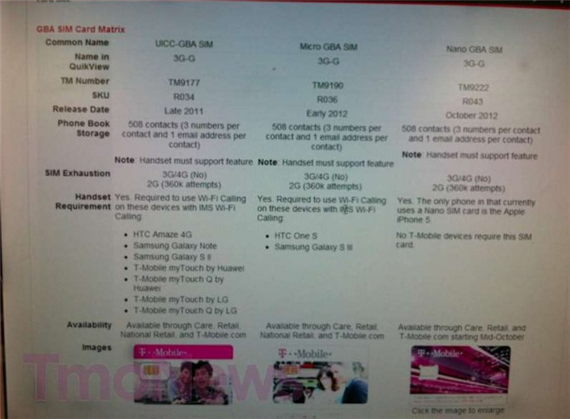 TmoNews revealed on their website the confirmation that T-Mobile in the US will not only offer the new nano SIM cards but also the new iPhone 5. However, even if you own the new iPhone 5 with T-Mobile in the US you have to settle with the speed of 2G EDGE service. This is because Apple’s iPhone 5 does not support T-Mobile US 3G network unless you move to some other states like Seattle, Las Vegas, Washington, and New York. In these places, HSPA+ network is available which is compatible with iPhone. T-Mobile in the US will be a little bit late with 4G HSPA+ network services. The company plans to launch their HSPA+ in full-blown by the end of the year and 4G LTE by 2013.