We are all aware now that it is a big “possibility” that the next and new Samsung GALAXY S III smart phone will be revealed on the 03rd of May 2012. The big event will be held in London with a theme named “Come and Meet the NEW Galaxy“.  And before the said date, Samsung launched a new teaser website at wild and it is the jumbled letters of the name “The next GALAXY“. The Samsung teaser website is now known as “tgeltaayehxnx” and you can visit it at tgeltaayehxnx.com. 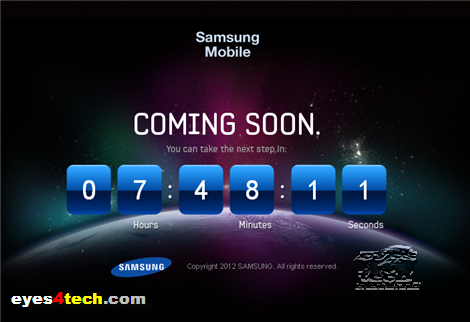 The Samsung teaser website entitled “A Whole New Universe” with nothing on it but a countdown meter showing the number of hours, minutes, and seconds left before they unveiled something.

Samsung is not only known as one of the popular global smart phone distributors but they have also build this reputation on creating teaser advertisements.  If you recall, they have already done this when they were about to launch the Samsung Galaxy Note and another one was when they placed an advert on the recent Super Bowl XLVI 2012.  And now, it looks like they are puuting so much effort on teasing all of the tech-consumers before the actual unveiling of Samsung Galaxy S III.

Well, I wouldn’t really bet that much on this teaser website and won’t be expecting that they will unveil the new flagship smart phone – not before the next Samsung Mobile Unpacked 2012.  It will just ruin everything and the excitement of all the spectators.  I guess, it will be more teasers to entice all of us.

It’s just a few hours from now, so what we can all do is wait and see what will this Samsung teaser website has to offer.