This is yet another glorious month for the Korean giant Samsung after they revealed to the public that their Samsung Galaxy S III sold 30 million handsets worldwide. While the company’s recent flagship Samsung Galaxy Note II already sold 3 million devices just in the span of one month. It’s not bad after all considering that there are other smartphone competitors out there and most especially Apple’s iPhone 5. This report came out from one of Samsung’s official Facebook headquarters in Poland yesterday. The company posted a teaser picture showing 10 people – 8 of them were holding a cardboard with numbers making up the 30,000,000 while the 2 of them were holding the company’s flagship smartphone Galaxy S III. 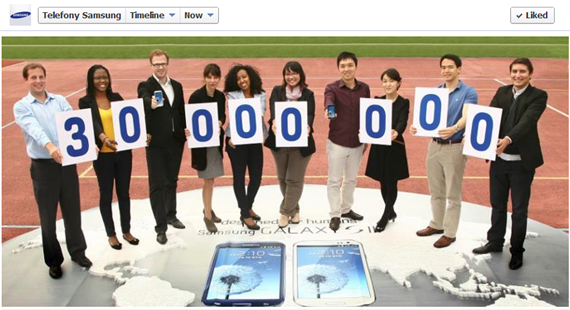 Samsung Galaxy S III was released five months ago and most of the users of this remarkable smartphone are now enjoying the latest Android Jelly Bean update. And it was predicted that the sales will still rise with the upcoming holiday shopping seasons – like the Black Friday. It is expected that prices of these devices will surely drop and get even cheaper.

On the other hand, the company’s recent released Android smartphone – Samsung Galaxy Note II – as mentioned sold 3 million in just a span of one month.  According to Samsung (see below), they are still optimistic even though the numbers are not that big when compared to Galaxy S III’s sales.

“The rapid Galaxy Note 2 sales have a meaning of not just creating a new category of smartphone, but also of popularizing the category”

We will all surely see more updates about the company’s sales but as of now, it shows that Samsung Galaxy S III is the best-selling Android smartphone among the mobile industry whereas the Galaxy Note II is still the king of phablets.