One of the known gadgets at the same time an online retailer websites, T3 The Gadget Website, awarded Samsung Galaxy S III as “Phone of the Year” for the year 2012. The prestigious T3 Gadget Awards event which was held yesterday gave recognition to the best technological products, brands, and personalities which made remarkable milestones over the whole year. And among the most recognized products was the Samsung Galaxy S III.  Well, I thought that the company will also get the “Brand of the Year” award but this one went to ASUS. Are you surprised? Well, I am but not that much. I know most of you guys were wondering and probably looking for either Nokia Lumia 900, Apple iPhone 4S (iPhone 5 was recently released so this is not included), or even the HTC One X.  But neither one of the aforementioned products or even smartphones appeared on the video from T3 Awards 2012 – you can watch the video below this article. 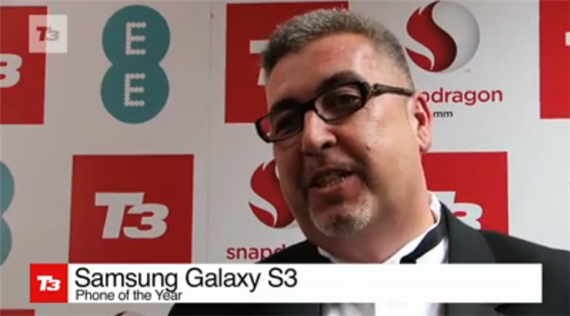 “Oh well, T3 is not only the awarding body there is in the whole world” – I can feel that this is what you are thinking now.  But why not? I mean why shouldn’t a consumer not consider Samsung Galaxy S III as the Phone of the Year ?  When it clearly shows how popular Galaxy S III smartphone is, not only with the company’s unbelievable and amazing sales on the first 100 days wherein the Galaxy S III sold 20M handsets globally. It became more popular as compared to its predecessor – Samsung Galaxy S II.  If we talk about the Samsung Galaxy S III features – this too big for a smartphone and too small to be called as a tablet can provide you features that you have never imagined before.  Frankly speaking, even with the release of Apple iPhone 5 the sales of Samsung Galaxy S III remains strong globally and the demands keeps on and on.

So here’s the rundown of T3 Gadget Awards showing all the winners.