For those Pinoys who are so eager to buy and grab their own Samsung Galaxy S III here in the Philippines, here’s some great news for you. Two of the leading mobile network carriers here in the Philippines – GLOBE and SMART – gave a teaser tweet which is an official hint that they will SOON have the latest Android smartphone Samsung Galaxy S III. Although, it is not yet decided as to when these big telecommunication companies will reveal the availability of the aforementioned Android smartphone, we can conclude that with their tweets it clearly state that they’ll have it soon. 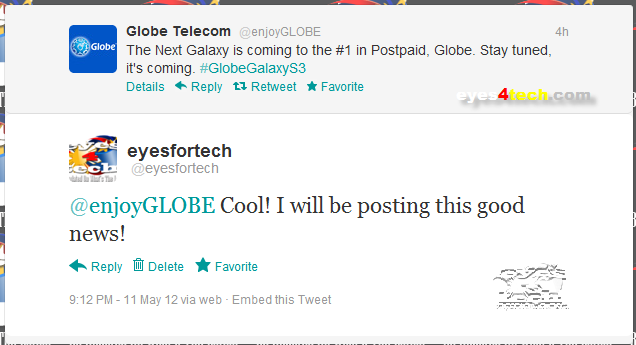 Virtual Numbers for Perfect World: What Are the Benefits?

Some initial reports says that the new Samsung Galaxy S III might be released here in the Philippines before the end of this month of May. Whether there’s truth about this report, it is a sure thing that these beasts are soon to land here in the Philippines.  This move from both leading network carriers are the same scene we all saw during the era of iPhone 4S which most of our tech-consumers are now using. They’ve bundled their iPhone with some great deals from Globe or Smart like those unlimited data, unlimited SMS, calls and many other more. My hunch tells me that this will be the same scheme that Smart and Globe will be doing for Samsung Galaxy S III.

Well, I am quite surprise not hearing anything from two of the known 3rd-party re-seller of mobile handsets – Kimstore and CMK. But I am pretty sure they will be having this latest Samsung Galaxy S III Android smartphones.

I know some might like Samsung Galaxy S III while some are not amazed, especially with the finishing design. But who knows, you might change your mind once you laid your eyes upon this new smartphone.

Let us just wait and see. Once I get the details from either Samsung Philippines, Globe, and/or Smart then I will keep you posted – hopefully with their price.