That’s right folks, Samsung already started on rolling out the latest Android update for Samsung Galaxy S III known as the Jelly Bean update (Android 4.1.1) or also known as the Project Butter. And the latest Samsung Galaxy S III Jelly Bean landed in Poland just the other day (24th of September). This was first announced by a German blog site called “All About Samsung” and they have began exploring the latest Jelly Bean update Android 4.1.1 with a firmware named PDA I9300XXDLIB CSC I9300OXFDLI1 MODEM I9300XXDLIB. First impression? All I can say is that the update is pretty amazing and one of the most noticeable thing that you will surely appreciate is how your Samsung Galaxy S III will become more responsive – smooth and even faster from the native Android OS. 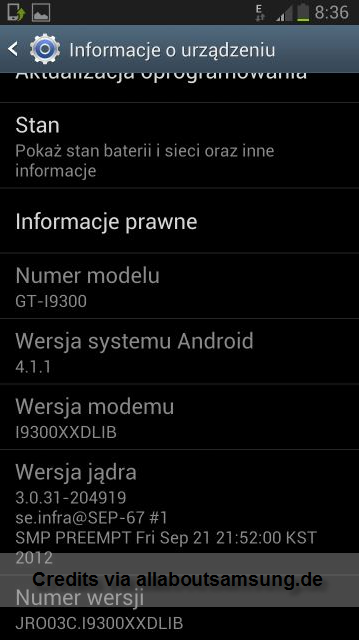 The Jelly Bean update was first made available through Samsung Kies but soon after that the 282.5MB Android 4.1.1 is now available via OTA or over-the-air update. Besides the speed and more responsive enhancements, Samsung Galaxy S III users will also enjoy the other features of Jelly Bean. One of which is the capability of the user to clear up some unused applications that are running in the background (free-ing up your RAM), also organizing your widgets, enhanced Settings menu, updated Notification bar, and many more.

This is a clear sign that all Samsung Galaxy S III users will soon receive the new Android OS update, all you have to do is wait. 🙂 So better gear up your handset now and start to back it up through Samsung Kies and if you still don’t have one installed on your computer, I suggest you visit now Samsung Kies website and download the latest version.