One of the most prestigious annual event this year, Mobile World Congress 2012, which took place in Barcelona Spain is almost over but with all of those gadgets and new mobile devices we’ve all witnessed is going to be around throughout the year.  And one of the most noticeable device there is the Samsung Galaxy Note 10.1 – from phablet and now a tablet. Yes, folks! The smartphone we knew and just met a few months have evolved and is now called the Samsung Galaxy Note 10.1.  According to Samsung, with Samsung Galaxy Note 10.1 it will ensure that we would be able to maximize this new device to boost our productivity and creativity. Well, they sure are tight about that. Check out the details of this new flagship from Samsung. 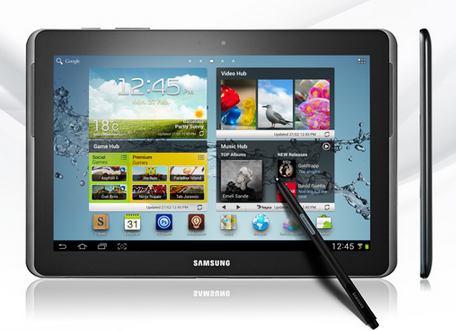 What is cool really with this Samsung Galaxy Note 10.1? First of all it’s nonetheless but the obvious – the size of this device. The display size of this tablet is 10.1 inches WXGA with 1020 x 800 pixels PLS TFT screen. And if you look into the image above (courtesy of Samsung), it has a multi-screen functionality. With this feature you can perform what it is intended for – multitasking activities. It’s like having multiple widgets on your screen where you can actually see them side-by-side and interact with them. You can surf the Internet on one widget, open an application on the other, watch a video on the other one and sketch or write with your S-Pen on other widget.  So if you are someone like me who always forget things most of the time, then you can really maximize Samsung Galaxy Note 10.1. Like when an idea comes in, then you can easily scribble it on your Note 10.1.  Samsung Galaxy Note 10.1 also provides a ready-made-templates for the end-users. Where you can easily access and jot down with the following templates for your meeting minutes, recipe, cards, diary, magazine and more.  And if you feel that your penmanship is that bad? You don’t have to worry because this device goes with a special feature called Shape Match functionality wherein your hand-writing sketches can be perfectly digitized.

Samsung also feels that with Samsung Galaxy Note 10.1, students will have a different learning experience. Students can now watch any live-streaming tutorials or lectures and at the same time while watching the video they can take down notes.  Students can also annotate while reading e-books from the device. Also like the feature mentioned above, Samsung Galaxy Note 10.1 also have a Formula Match functionality which will help the student by correcting and digitizing the formulas sketched by the student.

Now if you are very articular with the results of your images or photos, then you can also fix those photos with some Adobe packages included in Samsung Galaxy Note 10.1 – Adobe Photoshop Touch and Adobe Ideas. Who doesn’t know what is Adobe Photoshop and how to use it (well, using it is something not everyone knows). You can now alter your photos and add some effects into it. Add some layers, combine photos, add effects and many more with Adobe Photoshop. While Adobe Ideas is a tool for free-hand drawing with the use of S-Pen.

If you haven’t noticed yet, the main highlights of Samsung Galaxy Note 10.1 points to one thing only – the S-Pen. Almost all the features cited uses the S-Pen and these pre-loaded applications or features were optimized and designed for this S-Pen.

Let us go deeper now by looking into Samsung Galaxy Note 10.1’s main specifications. I already mentioned the display screen above and it’s quite a big screen. Come to think of it, here I am thinking that almost all the gadgets nowadays are getting smaller. And now Samsung Galaxy Note is getting bigger?

To support the pre-bundled and pre-loaded applications aforementioned it is expected that Samsung Galaxy Note 10.1 should also be that powerful beast. This device sports Android 4.0 Ice Cream Sandwich operating system running on 1.4GHz dual-processor and HSPA+ which can run on a download speed of 21Mbps. A dimension of 256.7mm x 175.3 mm x 8.9mm and weighs 583g. It is now using Bluetooth version 3.0, Wi-Fi with a 3MP autofocus rear camera with LED flash. It goes with 16GB, 32GB, and 64GB user memory and 1GB RAM. Don’t worry about extra storage because you can extend it by using a microSD up to 32GB.

Basically, that’s it. Pricing has not been revealed yet but I will surely post it here once I get the update.