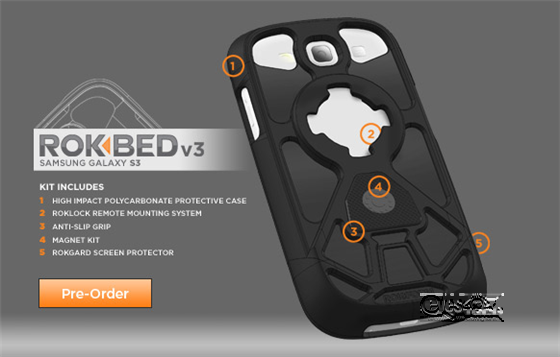 Rokform Rokbed offers a wide variety of protective casings from iPod, iPad, iPhone 4, iPhone 4S and even stands for your device. They even offer a DIY or do-it-yourself designs for your own iPhone 4 and/or iPhone 4S. No wonder this company was not only known for their superb Polycarbonate protective cases but they were also recognized in the recent event and acknowledged as a CES Design Award honoree.  Now, with Rokform Rokbed v3 S3 they wanted to ensure with their customers who will buy their product that they are getting the best Samsung Galaxy S III protective casing.  This is a actually new edge for the company jumping from Apple products and now entering the Android world starting with Samsung’s top smartphone today – Samsung Galaxy S III.

If you previously saw Rokform Rokbed V3 for iPhone 4/4S, the same package will be offered for the Samsung Galaxy S III. Of course there’s the anti-slip grip which prevents your smartphone from slipping or sliding from smooth surfaces. Also there’s the Definitive Lock from which latches your smartphone protecting it from ejecting during high impact activities. And of course the whole casing is a high impact polycarbonate frame couples to protect your Samsung Galaxy S III.

Along with these physical features of which is soon to be the best Samsung Galaxy S III protective casing are its accessories for your outdoor activities like the bike mount, camera tripod, and sport clips. And how can I forget the RokLock Remote Mounting System and magnet kit? With this, you can mount your smartphone on almost any surface like in the kitchen or even on your car.  The screen display is one of my primary concern and with Rokform Rokbed V3 S3 for Samsung Galaxy S 3, this is now covered by RokGard Screen Protector.

As I’ve said, this Rokbed v3 S3 Case will be officially available next month and will be offered in a variety of colors as with their iPhone 4/4S casing.  However Rokform now offers pre-orders of this protective casing for Samsung Galaxy S III.  The price of the best Samsung Galaxy S III protective casing Rokform Rokbed v3 S3 will start at $45.00.  For more information, you can check Rokform online shopping cart.