MANILA, Philippines – The talks and petition to repeal the Republic Act No. 10175 Anti Cybercrime Law is still far from over. And it’s not only various organizations, common individuals were clamoring for the government to revisit and repeal the new cybercrime prevention law but International groups and individual as well.  INTERAKSYON reported that there are 11 petitions filed as of today against the said new law and the most recent entry came from the Philippine Bar Association. It is expected that there will be more coming in to oppose the new cybercrime law in the Philippines. Furthermore, while more and more Filipinos are laying out their petitions against R.A. 10175 law, there are also various underground groups who have been active opposing the new law – the hackers. “Anonymous“, is the name of the underground organization that have been responsible for defacing different government websites here in the Philippines. And they are not only composed of local hackers but they also have acquired aid from some other hackers from other parts of the globe.

The petitioners who have unified against the Philippine cybercrime law have called themselves with a hash tag #NoToCybercrimeLaw and this is also a call to all netizens to do their part by sharing this hash tag on all various Internet medium – social media and websites alike. To let the government know that this new law is somehow an invasion of one’s privacy. 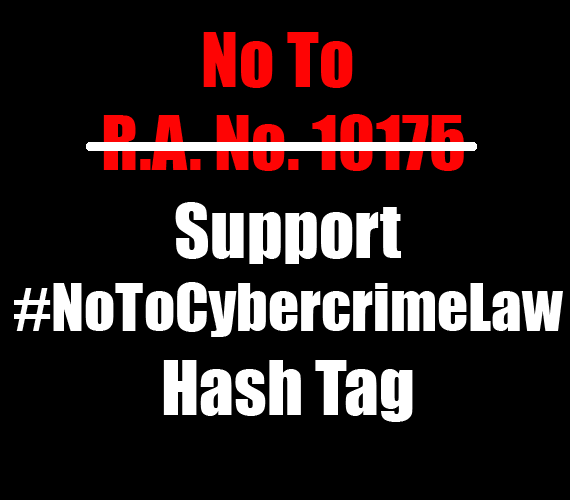 Before I go any further, I also wanted to share with you the message from the International underground society expressing their cooperation against the new imposed cybercrime law in the Philippines.


As mentioned, have the Philippine government not learned anything from the recent stories about SOPA? We, from Eyes4TEch were one of those many websites (along with Facebook, Google, YouTube, and many more) who protested against the Internet Censorshipbills last January.  The bill is still on hold as of today and one of the reasons why is because it violates one’s freedom of speech. Social media is the first that will be impacted by any law like what we have now. Imagine your daughter singing one of the hit songs of Regine Velasquez – Alcasid, or any from our local artists and you post them on YouTube – this is already considered as piracy. You have uploaded a video with a song from someone without asking for their consent. Or let’s say on Facebook, you post something on your wall something like “My neighbor got a new tongue pierced..” an expression that is so vague but your neighbor took it negatively and you can go to jail for 12 years because of the R.A. No. 10175 Anti Cybercrime Law. I mean, look at it. These simple matters which can be discussed in a civilized manner and there are even ways where the affected parties can avoid this. Like, how about removing them from your friend’s list, blocking them, reporting them as spammers, or even report that the posted video is your property and there you received no advise from those who re-uploaded them. Social media, for one thing is a personal and private account. It is a venue of one person to express freely what they feel or what they wanted to share. And if they abused it, there are available counter-measures to bring that matter down. And for me, imposing a cybercrime law with vague rules becomes redundant to what is already in place.  Haven’t our politicians ever wondered WHY was SOPA, PIPA, and many other similar cybercrime laws didn’t pushed through even on those first world countries? Have they not learned anything about it? Or are we just trying to show the world that “if you can’t implement it, well we can.”. Have our government even consulted the people on what will be the effect of a law like this one? I don’t know. But what I do know is that it will surely affect us all. Imagine yourself, you can no longer or at least be cautious now to put something like “I hated my ISP Wi-Tribe because of their worthless service and slow Internet connection. They just rob us of our good money and not providing good services.”  – you might end up in jail for cyber defamation.


I am one of those concern netizens calling upon to our government to revisit the anti cybercrime law. Any law is not bad, it is part to put things right FOR as long as it doesn’t hurt your constituents.