As you all know, while there’s an existing problem with iPhone 4S battery usage which remains a mystery and Apple engineers are still working on the fix (hopefully the soonest) another bug was found by the people who got their first iPhone 4S and that lies on its audio during voice calls. Yes, another problem (not yet proven if this is a bug) has been found which heightened the problem of the end-users. The problem was raised by one of the iPhone 4S users on the Apple’s official forum. The user with a cyber-name “Themacguyver” started the thread saying that he have a 32GB iPhone 4S and encountered this echo sound during a phone conversation with a use of headset. 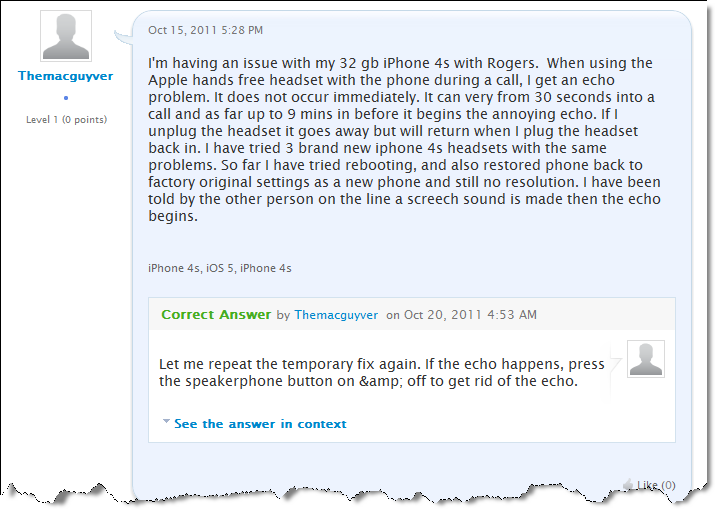 Unfortunately, it looks like that no one from Apple acknowledged the reported problem. If you visit and read the thread it seems the discussion is getting bigger and bigger. Some have found an alternative solution but like with the battery problem it does not resolve the problem to all iPhone 4S users – but for some it actually worked. Some also tried using a special kind of headset that filters the echo sound but at some point they still experience an ambient echo while having a phone conversation. They also tried switching earphones from one type into another but to no avail.

At first, I also thought that this noise can be attributed to the TELCO or carrier but as I read the thread it looks like that it’s not the case since the end-users experienced the problem not only from one carrier but also with others.

My next hunch was the iOS, and this became stronger when one iPhone 4 user upgraded his phone to iOS 5 and after that he is now experiencing the same problem with iPhone 4S users. So this means that this is not a hardware issue and most likely a bug on the iOS 5 platform.

The alternative solution provided from which you can try to resolve the noise problem on iPhone 4S is to switch on and off the speakerphone once you encountered this echo problem. This is not a 100% guarantee that will fix the problem but it looks like this is your only option as of now while Apple makes a move and fix the problem.

Are you encountering the same problem on your iPhone 4S? And for those who are still planning to get iPhone 4S, would you gamble to buy knowing that there are now known problems with this device?

You can monitor the updates about the iPhone 4S noise problem here.