It was just last month when I shared with you the HTC One family series (HTC One X, HTC One S and HTC One V). And mid this week I received a new report that a new HTC smartphone will be launch by a Japanese telecommunication mobile carrier soon and it is called the HTC J with a model number or codename ISW13HT.  Although it is not clear when will be the specific release date, many of the tech-consumers are now seeing this HTC J (ISW13HT) to be somehow similar with HTC One S technical specifications enclosed into a newly designed body. 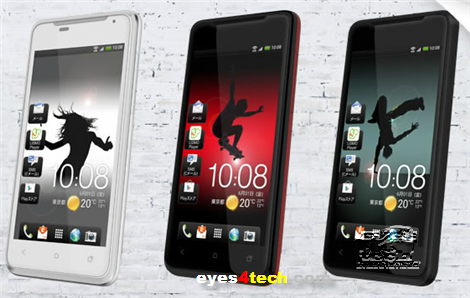 The HTC J codenamed ISW13HT is an Android 4.0 Ice Cream Sandwich dual-core processor smartphone will be the next handset that will be released by HTC Japan under KDDI mobile carrier.  This smartphone is powered by Qualcomm Snapdragon Dual-core 1.5GHz processor with Adreno 225 GPU. The RAM memory is 1GB with 16GB internal memory (ROM).  Still feeling short with your storage? Don’t worry because you can add more space by adding a microSD memory card into its slot up to 32GB. The dimensions of HTC J is 132mm x 66mm x 10mm and weighs at about 142 grams. I think you will also enjoy watching videos, viewing photos and playing Android games with its 4.3 inches 960×540 pixels qHD multi-touch display.  And when you feel like capturing special and unforgettable moments, you can shoot it with HTC J’s rear-facing 8MP with LED flash and 1.3MP front-facing camera.

Another inclusion with HTC J, like all other recent HTC smartphone releases is that it comes with Beats Audio and you can have additional virtual storage where you can access anywhere (even on Desktop PC) because of the Dropbox support. The downside of HTC J is that it won’t be released for LTE but rather on WiMAX.  Still, it’s not bad at all.

Aside from the release date, the price of HTC J has not been revealed yet.

With new LTE smartphones coming, would you still buy this non-LTE HTC J?

For more information, you can check HTC Japan official website.