On October last year I featured here in E4T the Virtual Assistant Siri version for Android based smartphones called Speaktoit Assistant, and since then I am still using the Speaktoit assistant for Android on my Samsung Galaxy S II and works perfectly fine for me – so far.  This is the only Android virtual assistant application for which I think can compete with iPhone 4S’ Siri.  Speaking of which and if you still don’t know, Siri or the humble personal assistant of iPhone 4S is one of the main key features of the said latest iPhone product.  And since the launching of iPhone 4S and its Siri virtual assistant application it went viral; now this became one of the demands of old iPhone users (Apple consumers who owns iPhone 3GS and iPhone 4). Today all iPhone 3GS and iPhone 4 users can now enjoy the same features and functionality and the feeling of having your own virtual personal assistant with Speaktoit Assistant for iPhone3GS, iPhone 4, iPod touch and iPad for as long as the iOS version is iOS 4.0 and above. 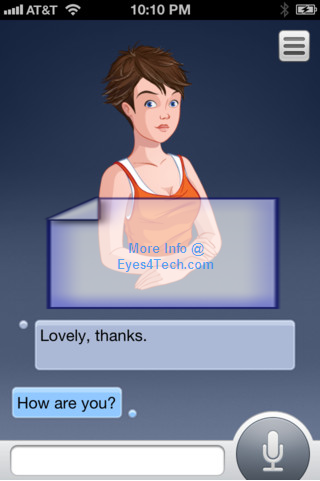 The Speaktoit Assistant for iPhone 3GS, iPhone 4, iPod Touch and iPad is so far your best bet on having a virtual assistant on your iDevices (Apple devices) unless you jailbreak your device and port the Siri application onto your gadgets.  Unless you don’t want to go through that hassle and you still want to have your own virtual assistant then you can download and install Speaktoit Assistant.

UPDATE: According to my tipster, the Speaktoit Assistant for iPhone, iPod Touch and iPad will be FREE for end-users who will download it on Valentine’s Day from the iTunes App Store.  But on Android Market it will and still be FREE.

Next Post Samsung Galaxy S III Pre-orders From Kimstore – An Early Publicity Or For Real?