Have you already placed your pre-order of Apple’s sixth generation iPhone 5 from your nearest iPhone 5 distributor or retailer or even online? If not, then I suggest that you do it now if you really wanted to be one of the first 5.5 million tech-consumers who will own the new sixth generation iPhone 5.  Latest reports from the likes of Verizon and AT&T, they have already exhausted their pre-order stocks of iPhone 5 in just a few days after the unveiling. I can only related this situation to a person who will see his new born child who haven’t seen it for quite some time. Apple followers have been waiting for this new smartphone and now almost everyone of them wanted to grab one boosting the sales of the aforementioned mobile giant. 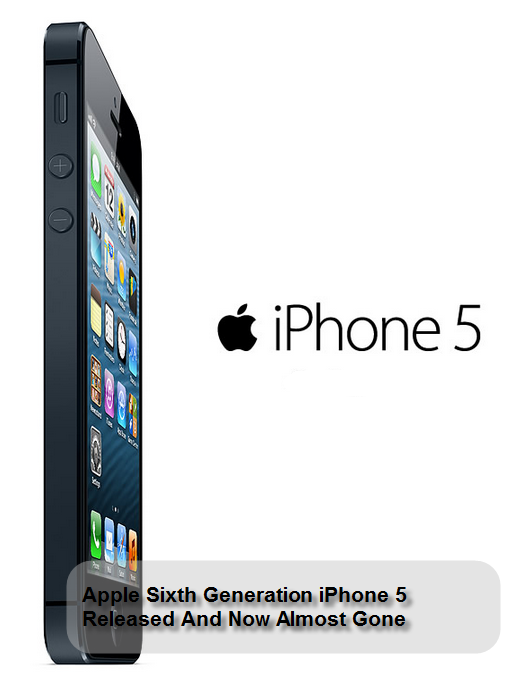 Last September 12 was one of the notable events from Apple when they unveiled their new product line-ups and one of which is the new “thinness and lightness” iOS 6 iPhone 5.  And in the first hour when the online Apple Store was restored after they have gone under maintenance, the new sixth generation iPhone 5 supply exhausted their pre-order supplies and stocks were depleted. Apple updated their online store and tells each tech-consumers who are planning to buy the new iPhone that it won’t be shipped for two weeks. During that time, three major players are still holding strong offering their consumers but promised each buyers who are placing their pre-orders that they will receive the iPhone starting September 21.  But as of 1PM ET 14th of September, both AT&T and Verizon have also exhausted their iPhone 5 stocks.  Sprint is the only player that only remains standing offering that they can still deliver the goods. Both AT&T and Verizon have updated their websites and committed that they can still ship the new iPhone by pushing the dates a little forward – 14-21 days which will fall sometime between the 28th of September to 05th of October.

The demands for the new sixth generation iPhone 5 is looking so good so far and if this continues Apple might regain its sales and popularity.  But what’s really with the new iPhone 5 that led people to buy it? For those who haven’t seen the Apple event last September 12, here’s a recap on what made the new iPhone 5 really amazing.

The first wave where iPhone 5 is currently distributing the new iPhone 5 includes the U.S., the U.K, Canada, France, Germany and Japan. And with the selling rate, I am pretty sure that these countries have already emptied their stocks and are now waiting for the next shipping from Apple.

Are you planning now to buy the new sixth generation iPhone 5?  While you decide here’s a small video clip from ComputerWorld’s Short Take answering if iPhone 5 is a game changer.

Previous Post The Best Smartphones You Have Never Heard Of Before