It is getting clearer every day that the release and the unveiling of the latest and new Apple iPhone 5 will be on September 12. A new report came out from The Loop through Jim Dalrymple as he shared an invitation he received and have shown an image that will surely capture your wits. The image has one sentence saying that “It’s almost here.” – it’s sort of a mind-boggling riddle of what’s coming. And below that is a big number “12” which led most readers that it’s going to be September 12. Lastly, the number “5” shadow under the number “12”. As we are all aware of, the latest and going to be released new Apple product will be the next iteration of their new iPhone – the new iPhone 5. 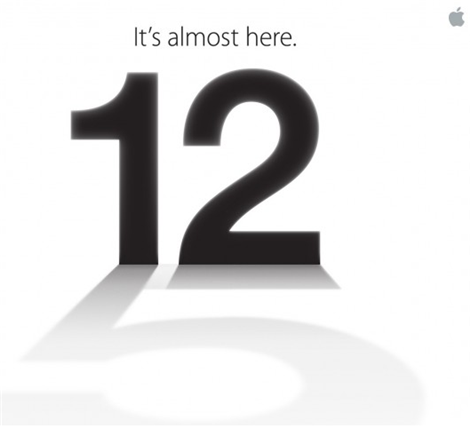 The only information we have so far about iPhone 5 are nothing but rumors and there’s nothing concrete as of the moment.  We’ve also posted some possible features that we might expect from the new iPhone 5, read our iPhone 5 Rumours Round-up.  And even the claimed new iPhone 5 earbuds that is being manufactured in Vietnam. As for now, as I’ve said nothing is concrete yet to consider as a “fact” until we see the real thing. And let’s hope that it will indeed show up on September 12.

According to Jim Dalrymple, the invitation he received says that the Apple event that will be held on September 12 will be happening in San Francisco at Yerba Buena Center for Arts at around 10:00AM. Citing his report,

Apple on Tuesday sent out invites for an upcoming event happening in San Francisco on September 12, 2012. The invitation I received says the event will take place at the Yerba Buena Center for the Arts at 10:00 am.

Until then, let’s just cross our fingers and hope that Apple release now their ultimate weapon to get back in the show.

Do you think that Apple will now finally release the new iPhone 5?

Next Post Hoodies On And Dress Up iPhone With iPod Hoodie