Apple iPad 3 users are now facing a dilemma and it boils down (and you can take it literally – “boils“) to the “overheating” problem of this iDevice.  It was said that it too warm than the normal and nothing compared to what these users experienced with their previous iPad and more specifically with their iPad 2.  A thread was started in Apple Support Communities and was triggered by an Apple iPad 3 user with a cybername faatty. She said that she enjoyed the new features of the new iPad 3 like the screen display and how fast this device but the odd thing is it’s getting warmer or hotter after 30min of usage.  She even said that she never encountered this on her iPad 2 before.

Why do the new iPad 3 has a larger battery in the first place?  Simply because of the main features of the new iPad 3 which are the Retina display which is said to be four times the number of pixels as compared to iPad 2 and another one is the 4G LTE chips; Now these aforementioned features would require larger battery and larger graphics chip to sustain a longer battery life of your iPad.

Another report came out and this I think will cause more end-users to think not only once to decide if they want to go for the new iPad 3. The Next Web reported that a funny message from the new iPad 3 comes out when it reaches a certain heat and this message goes like – “iPad needs to cool down before you can use it.” 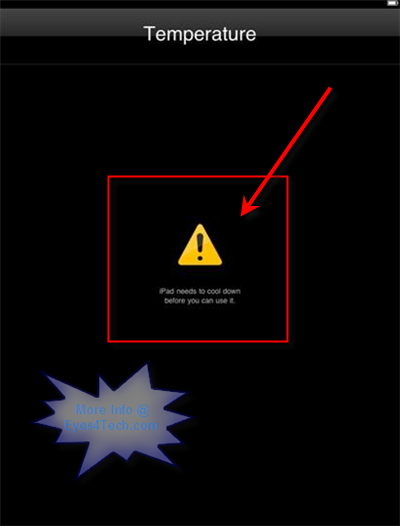 So, imagine yourself now enjoying your summer outdoor activities with your friends or relatives and your new iPad 3 is somewhere exposed to sun’s furious heat.  Then this special moment pops-out and you wanted to capture it with your camera or let us just say you wanted to just use your new iPad 3 for some reason and BAM! The message above appears – there goes your excitement and special moment, flying away.

Some are now mocking the new iPad 3 and saying that maybe this new iPad 3 should have carried the name the new “Kindle Fire” Apple version.

I do hope Apple can provide a solution for this because it’s not a good excuse that just because you have a wide range of new features on a new device, means that the comfort of using it will be compromised. A good product should provide a good quality and should exceed customers’ expectation – always.