Fresh and hot! Anonymous hackers takes over the Philippines National Bureau of Investigation (NBI)’s official website down. This activity was also seen late this week when the Anonymous hackers took some of the US websites down like FBI, DOJ, Universal Music and many more. The reason behind is still unclear but a new Facebook fan page named Anonymous #OccupyPhilippines shows that they have taken the NBI’s website down and when I checked it, it was indeed decommissioned. And I checked Google’s cached page of the NBI’s website and confirmed that it was indeed not working. This attack is most probably done through DDOS or distributed denial-of-service attacks from the hackers.

This is the snapshot from Google’s cached pages of NBI’s website before it was taken down. 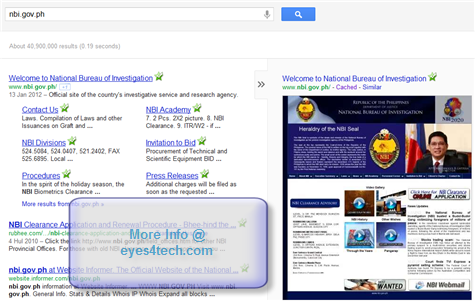 As I’ve said before, the reason behind is still unclear and I haven’t seen any updates yet from PrivateX nor from the group of Anonymous. I will try to update this as it progress. But the biggest question now is how are our local administrator would handle such attacks. It looks like they’re are not ready to face modernization.