Look what I have just spotted on my email, RovioMobile just sent another update that they are now prepared to launch their next and new Angry Birds theme game and guess what will it be this time – Angry Birds Star Wars. The new Angry Birds Star Wars will set foot on our browsers, smartphones whether is it on iOS or Android, and PC or MAC on November 08. But to put a little spice and excitement to every Angry Birds game lovers, they already launched their pre-launching advertisement on YouTube and Tumblr.com.  RovioMobile promised their followers that until the launching date, they will keep on updating their Tumblr website every week filling it with behind-the-scenes content, animations (like the one in the site now), comics, and a lot more.  Here’s the email I received. 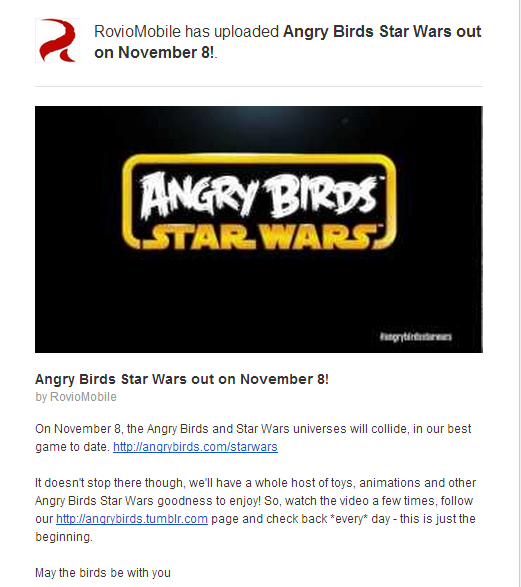 Unfortunately, I have been busy on other stuffs over the last couple of months and the only memories I have of Angry Birds is when I downloaded and played Angry Birds Space for Android. And hopefully, I would be able to see how the famous and one of the most addictive game for almost all platforms collides with the one of the famous movie of all time – Star Wars. 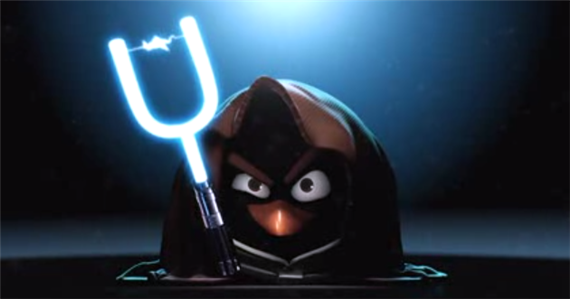 Although there’s one small thing that makes me curious but it’s not really that biggie. RovioMobile have a dedicated domain for all their Angry Birds releases and the Angry Birds Star Wars link – http://angrybirds.com/starwars – is redirecting users to their Tumblr website. I just wonder, is it possible that they intentionally made it that way until the final unveiling? Maybe, or maybe not. 🙂