Heya DABARKADS! If you’re an avid viewer of the most popular noon time show Eat Bulaga then “Pinoy Henyo” is not something new to you. But I am not here to discuss with you the show but rather this post is all about this new FREE Android game app which was made by a certified Pinoy (kaizenbrew) called – Pinoy Henyo (Teamup Word Game).  But this game is not only for Pinoys, this can be enjoyed any all who would like to play a team up word game.  What made me really so happy about this Android application is, the Pinoy Henyo Android game made it to the top free Android application and not just on the top, as of writing this article it now sits on the second place next to Facebook for Android application.

How the Pinoy Henyo is played?

The Pinoy Henyo game which was originally conceptualized and made as part of the noon time show Eat Bulaga! is somehow similar to  the game of Charades where there will be teams competing to get a score by guessing the correct answer of the person in front of them giving out clues by just showing some hand gestures, movements and or writing the clues on the board – the main rule is “DO NOT GIVE THE DIRECT ANSWER” for the person giving out the clues to his team.  As for the Pinoy Henyo game, there are only two participants on each team; one of the them will just have to answer either “OO” (yes), “HINDI” (no), or “PWEDE” (maybe) while the other one will have to wear the specially made helmet with running LEDs on the forehead which happens to be the word that the bearer needs to guess.  The bearer of the helmet can ask as many questions to his teammate leading that will soon lead to the answer.  Now, how to win? Whoever teams who guessed the word correctly with the shortest time – then the team wins.

Normally, we play this game at home or whenever we’re on a family gathering.  We will divide ourselves and of course not all can play at the same time because some of them will have to play as the timekeeper and judge.  But with this Android application called Pinoy Henyo, we will only need one judge and at the same time he will be responsible for holding the device for each team while one of the pair is guessing the word on his head.  The application comes with a random words from which you need to guess in 2minutes only (this is the official time of Eat Bulaga for each word to guess).  You can also have a jackpot round and even customize your game.  You can also play it as a couple, well if you really have nothing to do then this is something that you can try as for your bonding moment.  If you still don’t get it, watch the video below from the celebrity edition of Eat Bulaga’s Pinoy Henyo taken earlier this month.

Here are some of the screenshot I captured early this morning while trying the game.  So why not support our fellow Pinoy and download this awesome game now.  Come to think of it you can use this application for the upcoming Christmas holidays while spending time with your whole family.

[note] UPDATE: This game is no longer available in the Android Market due to patent issues. And even after the developer of the Pinoy Henyo game for Android tried to recreate the original game into a new brand called Are you the brighTTest? – this one was also taken down. But if you still wanted to download Pinoy Henyo (Teamup Word Game) APK (source) and install it on your Android mobile/device then we spotted this link. Download Pinoy Henyo for Android (APK)  [/note] 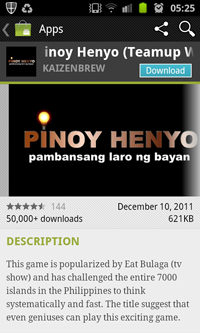 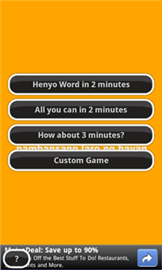 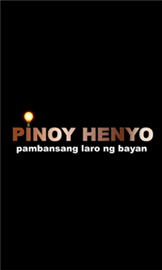 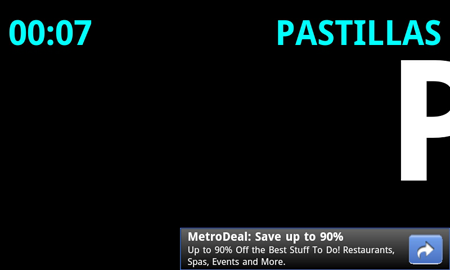 When this game is played offline (or if your WiFi is turned off), there will be no ads showing below the scrolling word  that you have to guess.

Also I have some screenshots below if you want to play the custom game.  This is where you set your own word for your players or teams to guess.

There are actually two (2) ways to download this game.  The first is to access it directly from your smartphone – connect your Android device to the Internet (either your data plan or WiFi hotspot), then click on Menu -> Market and then search for “Pinoy Henyo”; OR from your computer open your web browser and go to the Android Market official website and log in with your GMAIL account and look for “Pinoy Henyo” (or simply click the download link I posted above.

Update as of 20th of December: Great news to all Pinoys! I would like to congratulate the creator of Pinoy Henyo Android game for bagging now the top position in the Android Market beating Facebook for Android!