Yes folks, it’s official from Samsung that on the 10th of March 2012 we, Samsung Galaxy S II (GT-I9100) owners, will now be getting the latest and most awaited Android 4.0 Ice Cream Sandwich OS update. You have an option whether if you want to update your smartphone through Samsung Kies (on your desktop computer) or download it via FOTA (Firmware Over-the-Air). Last week I upgraded my Samsung Galaxy S II firmware through FOTA thinking that it was already the Ice Cream Sandwich firmware update but it was just an update for my current Android 2.3 Gingerbread. It wasn’t bad after all because my Samsung Galaxy S II navigation and swiping experience became a little bit more faster than before it was updated. 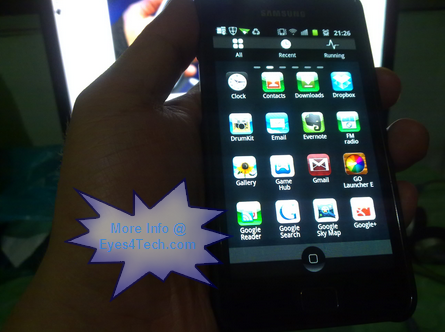 Last November 2011, if you have not been following my posts it was already reported that the ICS or Ice Cream Update for Samsung Galaxy S II (GT-I9100) will be coming this year – before the end of first quarter.  And it looks like that Samsung is just on time before the end of Q1’2012.  You and me will be seeing now the best out of Ice Cream Sandwich Android OS like the upgraded version of Samsung TouchWiz UI, Face Unlock,  and Android Beam. There’s also the added functionality – Mobile Network Data usage function and multi-tasking usage and some of the applications (unnamed) improved – according to Samsung. However, because of the Ice Cream Sandwich features Flash applications or viewing and Bluetooth 3.0 HS will not be supported.  Please do take note that Bluetooth 3.0 will remain supported.  I am pretty sure that once I loaded it on my smartphone then I would be able to explore more about this update like how is Samsung Galaxy S II performs with ICS’ multi-tasking activities and possibly test it with my bench-marking Android applications.

Samsung made some pointers for those who plans to upgrade their Android OS from Gingerbread to Ice Cream Sandwich.  After the update, although some of the important data from your smartphone are still intact like your phone book or contacts, messages, and photos/videos – some of the settings will be initialized.  Home screen and your personalized sorting of applications will be initialized. And some settings of your Samsung Galaxy S II will be changed (as part of the promised improvement) to bring optimization onto your smartphone.  Again, I must reiterate to you that in order for you to avoid losing your important data from your Android smartphone then you must backup first all the important information from your smartphone. And one of the best way to do it is by making a backup through Samsung Kies.  If you want a step-by-step guide on how to backup your Samsung Galaxy S II – check my post here – (How To Backup Samsung Galaxy S II GT- I9100 Using Samsung Kies).